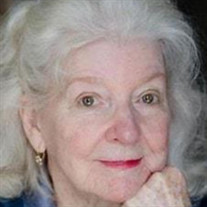 Mary Ann Thebus, a much-loved Chicago actress and teacher with decades of experience on the city’s stages, died Friday at home in Chicago’s Andersonville neighborhood. Her daughter, Jessica, said that her mother died following a five-year struggle with lung cancer. She was 89. An unstinting performer dedicated to truth on stage, Thebus had many performances; she continued to work in the Chicago theater well into her 80s. Throughout her career, she underpinned everything with an exceptional level of craft. But her trademark also was vivacity and unpredictability. “My mother loved life and she had a powerful life force,” said Jessica Thebus. “That was manifest in her artistry, her teaching and her nurturing of kids, animals and friends. She really genuinely wished for that same love of life for everybody.” Memorable work across the years from Thebus included playing Gertrude opposite Aiden Quinn’s Hamlet in Barbara Gaines’ Chicago Shakespeare Workshop production of “Hamlet” in the 1980s; as an alcoholic manipulator of adult children in “The Ordinary Yearning of Miriam Buddwing” at the Steppenwolf Studio Theatre in 2001 (opposite her friend Mike Nussbaum); as Amanda in Sheldon Patinkin’s 2005 production of “The Glass Menagerie” at Gift Theatre (she’d previously played the role at Court Theatre); and as Mariana in director Robert Falls’ 2017 Goodman Theatre production of “Uncle Vanya.” She also played the famous role of Mary Tyrone several times in Chicago productions of Eugene O’Neill’s “Long Day’s Journey Into Night.” But that is hardly a complete list of a vast swath of work that extended from Northlight Theatre to the Goodman to Steppenwolf. Some of her work was directed by her daughter, Jessica, an accomplished stage director and faculty member at Northwestern University. Later in her career, several of Thebus’ performances dealt frankly with the subject of aging, such as her appearance as Marjorie Prime in the Jordan Harrison play of that name seen in 2015 at Writers Theatre in Glencoe, in Joel Drake Johnson’s “Four Places” in 2008 at Victory Gardens Theater, and Samuel D. Hunter’s “Rest,” also at Victory Gardens, one of Thebus’ many regular artistic homes. Although she worked from time to time in film (”Rudy”) and television (including “Cupid,” “Early Edition” and “The Untouchables”), the Chicago stage was her first love. “I would rather,” she famously told this newspaper in 2000, “perform at the Organic Theater Company for a pittance than do some dumb film shoot where I say three little lines and get paid far more than I could make here in the theater in an entire year.” Thebus was born in 1932 in Washington, D.C., into a political family (her father was a federal district judge). She graduated from the University of Pennsylvania and, following a graduate degree from the University of Michigan, she became a psychiatric social worker in San Antonio, Texas. Her late husband, William Thebus, was an English teacher, and the couple traveled extensively in the early years of their marriage. Thebus started acting in expat theater companies. When the couple moved to Chicago in 1977 as their children reached middle-school age, Thebus became a Chicago actress at 45 years old. “Mary Ann was a fierce and ferocious a truth-teller as there ever was on stage,” said B.J. Jones, the artistic director of Northlight Theatre. “But she was intensely empathetic. I think she truly was incapable of falsehood, which is one of the reasons her students loved her so much.” “She was just the most wonderful human being,” said the actor Meg Thalken, a longtime friend. “She gave back more than any other actor I have ever known.” Indeed, a broad swath of Chicago actors saw Thebus as a teaching mentor who always was in their corner and they took to social media to lament her passing. Thebus started teaching acting at both Wisdom Bridge Theatre and The Training Center; in later years, she taught at both the School at Steppenwolf and The Artistic Home. Among her closest friends was the late Martha Lavey, the longtime artistic director of Steppenwolf. “We will miss the humor, truth and courage of our dear friend and mentor,” said the actor Carmen Roman. Survivors include Thebus’ daughters Jessica and Nana Marie Thebus, and two grandchildren, Leo and Willa Marie. -Article by Chicago Tribune Critic - Chris Jones An intimate green burial will be held at Casper Creek Natural Cemetery in Galena Illinois. Plans for a late March memorial are pending. Funeral Arrangements entrusted to Inclusive Funeral Care located at 4880 North Clark Street, Chicago, Illinois 60640. For information inclusivefuneralcare.com 773.318.1305 or [email protected]

Mary Ann Thebus, a much-loved Chicago actress and teacher with decades of experience on the city&#8217;s stages, died Friday at home in Chicago&#8217;s Andersonville neighborhood. Her daughter, Jessica, said that her mother died following a... View Obituary & Service Information

The family of Mary Ann Thebus created this Life Tributes page to make it easy to share your memories.

Mary Ann Thebus, a much-loved Chicago actress and teacher with...

Send flowers to the Thebus family.