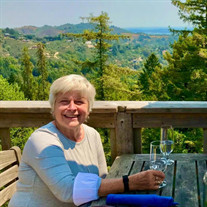 Evanston lost a remarkable woman when Janet "Jan" Westhoff Freise died at her Evanston home on December 9, 2021. Jan’s life had an unusual trajectory. She was born on November 4, 1943 in the rural town of Winfield, Missouri with eight siblings. She discovered books at an early age and remained a passionate and sophisticated reader her entire life even though she never pursued a college degree. After completing high school, she married Victor (Vic) Freise, a carpenterof Old Monroe, Missouri. They decided to enlist with a Catholic missionary organization and spent the early years of their marriage in the western highlands of the island of New Guinea, where she taught school and he built schools and churches. They returned to America; moving to the Chicago area in 1971 and to Evanston in 1973. There they started a general contracting business, Freise Construction (later called Zigmil, Inc.), in the basement of their home. Eventually, they relocated the business, to Florence Avenue. Vic and Jan made a point of hiring ex-offenders and others from disadvantaged backgrounds; giving second chances and training employees for future success. They were instrumental in helping tradespeople start construction, concrete, cabinetry and millwork businesses of their own. She was passionately committed to community life in Evanston. The annual block parties that she and her husband organized on Florence Avenue were legendary. She loved parties and was a magician in the kitchen. One friend recalled a late afternoon when Jan came to visit; as it got to be suppertime, Jan opened her host’s kitchen cabinets, taking ingredients from here and there to make a meal – without consulting a recipe. Her other activities included volunteering with Relay for Life (a breast cancer fundraiser which she chaired twice), serving as a member of Mothers Against Gangs, cooking for the soup kitchen Soup at Six, and washing donated clothing for ESCCA (Evanston School Children’s Clothing Association). She shared her love of the books she read by passing them along to friends and suggesting that they pass them along in turn. She did not want them back. She wanted them to be “enjoyed.” Jan was fiercely committed to civil rights and social justice and her conversation rarely strayed far from politics. In 2003, she and a friend flew to Washington, D.C. to present Congresswoman Jan Schakowsky a petition signed by about 50 people, mostly Evanstonians, protesting the invasion of Iraq. For several years, she spent Monday mornings with friends – including an alderman and a school board member – at the Evanston Poker District. The EPD was a roving “district” that, like Brigadoon, settled on the home of the host – since playing poker for money was illegal in Evanston. When Vic suffered a disabling stroke in 2007, she became his full-time nurse, advocate, and therapist, even as she worked to keep Zigmil afloat. With her signature energy, optimism and intensity, and her refusal to take no for an answer, she helped Vic make real progress against enormous odds. After his death in 2012, she walked the several hundred miles of the Camino de Santiago (the Way of Saint James) in Spain to remember him. She loved travel and continued traveling in the years after her husband’s death, visiting every continent outside of Antarctica (too cold!). She is survived by her children Jay (Dee), Joel (Jean Marie), Nea, Jordan, Jeremy (Julie), and eight grandchildren whom she loved fiercely: Justin, Jake, Jaya, Eva, Madeline Vic, Katelyn, Joel Jr., and Blake, along with all of her siblings and many nieces and nephews. Memorial celebration Friday March 11, 12noon - 4pm (eulogies begin 1pm) at Halim Time and Glass Museum, 1560 Oak Ave., Evanston, 60201. Attendees please bring proof of vaccination or recent negative test. Donations may be made in her name to Habitat for Humanity www.habitat.org or Evanston School Children's Clothing Association https://www.escca.org/ Arrangements entrusted to Inclusive Funeral Care, 4880 N. Clark Street, Chicago, Illinois 60640. For information, 773-318-1305, www.inclusivefuneralcare.com, [email protected]

Evanston lost a remarkable woman when Janet "Jan" Westhoff Freise died at her Evanston home on December 9, 2021. Jan&#8217;s life had an unusual trajectory. She was born on November 4, 1943 in the rural town of Winfield, Missouri with eight... View Obituary & Service Information

The family of Janet "Jan" Westhoff Freise created this Life Tributes page to make it easy to share your memories.

Send flowers to the Freise family.