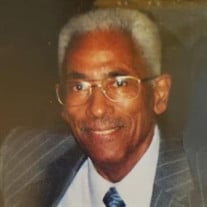 Not sure what to send?

Bernel Anthony Deransburg, Jr., “Butch”, 82, of Walls, MS; passed away October 4, 2020 in Memphis, TN; after a long battle with dementia. Born New Orleans, LA, Bernel graduated from St. Philip’s High School on Chicago’s west side and played drums in the All-City High School Band. He studied Clinical Psychology at DePaul University, where he was a proud member of Kappa Alpha Psi Fraternity, Inc. After completing his degree, Bernel volunteered as a medic in the U.S. Army (1961-64) and received a Marksman commendation. He enjoyed a long career working for the federal government in various capacities, most recently with the U.S. Department of Labor, where he qualified foreign nationals for specialized work visas. An intellectual and a talented musician, Bernel loved jazz, global cuisine, and reading. He valued education and as a hands-on father, encouraged his children to communicate, question, and investigate. Beloved husband of Alice Brown Deransburg; devoted father of Ecila (Terry) Deransburg-Cook and the late Lu A’ku (born Bernel A. Deransburg, III; AKA “Skip”). Very proud grandfather of Kieran and Tierra Cook. Dear sibling of Miriam Deransburg and George, Elizabeth, and Katherine Martenia. Preceded in death by parents Aline Cecile Deransburg (nee Forstall) and Bernel A. Deransburg, Sr. In lieu of flowers, donations may be made in his memory to the Alzheimer’s Association, www.alz.org. Interment of cremated remains with military honors Tuesday, July 26, 12noon at Abraham Lincoln National Cemetery, Elwood IL. Arrangements by Inclusive Funeral Care, 773-318-1305.

The family of Bernel A Deransburg Jr. created this Life Tributes page to make it easy to share your memories.